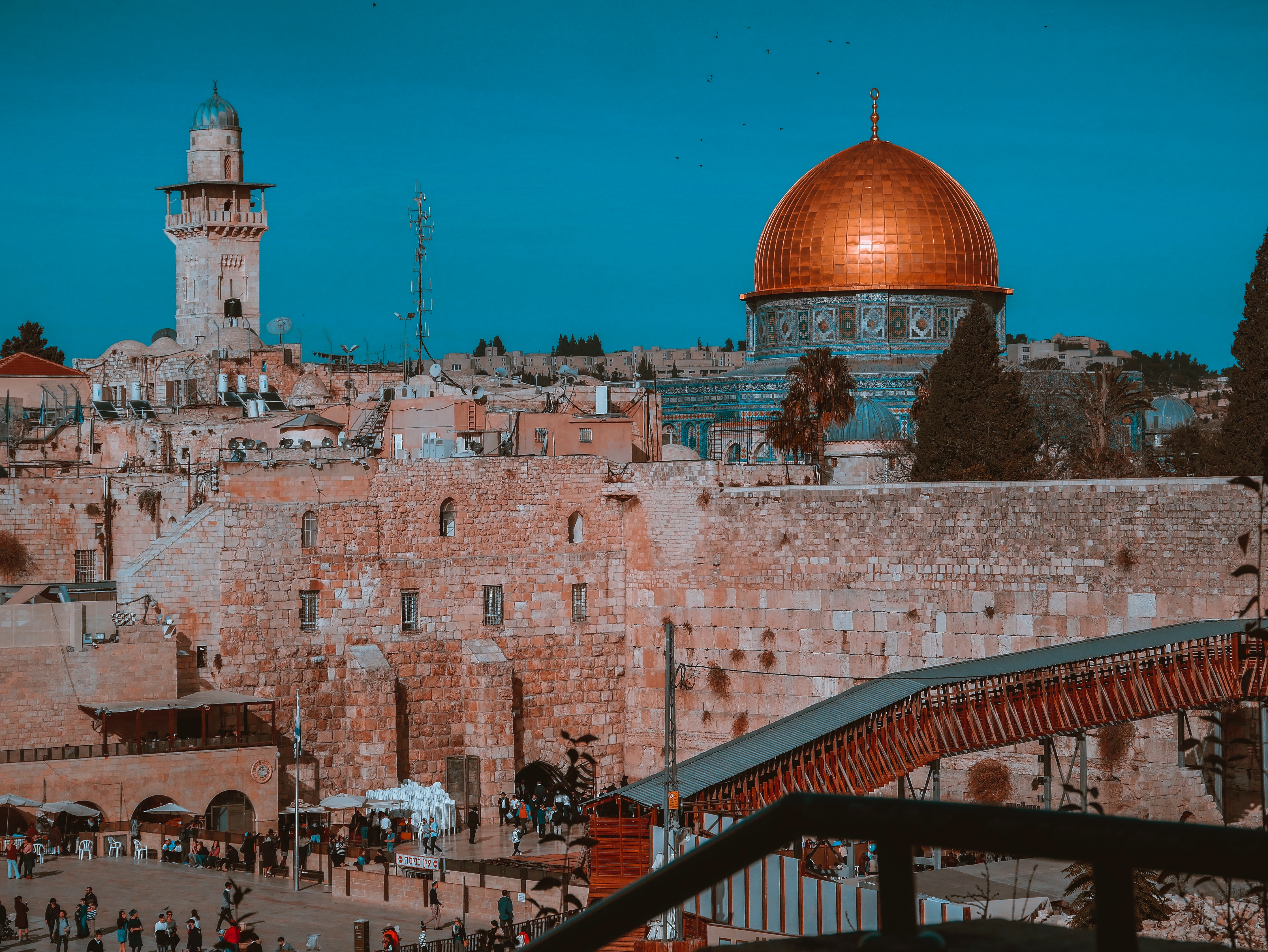 How I Learned The Secret Ingredient For Handling Conflict In Israel

How I Discovered The Secret To Doing Career Conflicts Well, In Israel

(Hint: This Surprising Secret will Change How You Do Conflicts in Seconds)

Israel is a place that seems somewhere between uncomfortable and fascinating to visit.  Its’ history riddled with conflict of course.  Dare I say, the cultural expression of which still feels present.  To an outsider.

Israeli’s sort of bristle.  Until you penetrate their coating of resistance.  When the pendulum swing to warmth can feel overbearing!

Not a single day went by on this trip, that I didn’t think about conflict in some way.  And wonder about the negative ripple-effect after ‘doing’ conflict.

So, because it is in everything this week, that’s what I’m writing about.  Sparked by the history of Israel itself, to doing a family conflict and of course, career conflicts are often on the radar when coaching professionals as I do.

I offer you my discovery:  the secret ingredient to doing conflicts – well.

While in Israel, we spent time with people who moved there some years before.  They had a surprising interpretation when we mentioned we’d noticed Israeli’s bristled. What was striking was their understanding and utter acceptance of the same social norms we were finding alien.

It was then something important started to come into focus. It doesn’t matter what conflict we experience – career-conflict or relationship conflict or even our own inner-conflict.

Computing conflicts so we can do them well, relies on a particular response pattern.  And I’ve worked out this secret ingredient is something we never do when conflict shows up. It will change the way your conflicts go forever if you change that.  So, I’m offering one, simple tactic you can use to do your conflicts well.

While we sat in a fab Israeli-Arab restaurant, noticing diners represented the fullest spectrum of cultural and religious backgrounds, our ex-pat hosts explained the social norms carefully:

In Israel they just don’t…queue (a fight had broken out in the toilets by The Western Wall!) / do customer service / seem friendly at first…and yes, you had glass bottles thrown at your car today… but that’s only a bottle!

These are Londoners. Just ordinary people, like us.  But living in Israel.  So, hearing them so very philosophical about what felt so alien, made me think. Hard.  They were saying:

Here, you literally have to throw out everything you know about moving in water, take a minute to work out what works and then do something new.  So, I thought about that.  What if, what I know about successful conflict, is upside down.

What was niggling in my head was the incredible acceptance levels we had heard.  As a conflict-response strategy, was that level of acceptance really tenable? Or Advisable?   How would that advice map onto conflict-resolution more generally?

Very badly indeed I thought.  Whose side should I be on when conflict situations show up?  Surely my own! We all know we need to fight for our rights (or at least put boundaries in place that satisfy).

But what if first moving into the other sides’ perspective, long enough to accept it, is critical to doing conflict better?

Now, I have coached professionals around assertiveness and boundaries often.  Because resentment is toxic if we don’t articulate where our boundaries are and then feel listened to.  But this knowledge wasn’t sitting well this week.  So, I did what I always do and dug into some psychology research.

On one level, our typical responses to conflict seem more like avoiding them, not handling them actually.  And it’s seems like that’s very acceptable – too much so.

The research reinforces it is deeply unhealthy to go along with something if you feel strongly against it.  And while submitting silently might stop the conflict escalating at the time, the issue can’t resolve unless you voice your perspective. And it is heard.  So, it festers and grows instead.  Denting emotional equilibrium and even your health, over time.

Day 5:  How To Compute Conflict In Relationships

We had a very difficult discussion all together on Day 5.  As families sometimes do.  About desperately important things.  One person has cancer.  Some folks aren’t on great terms with others. There are reasons and feelings.  Everyone cares.  A lot.  But differently.

And there it was:  history hangovers, in the way of resolution.  That need respect.  Why?  Because if different ‘sides’ aren’t aligned on the desired outcome, it can’t be about resolving.  It needs to be about listening and accepting – sometimes really sticky stuff.  Even when you can’t understand.  Even though that makes it hard.  Very hard.

So, let’s look at recommendations to compute conflict in important relationships.  And then I’ll tell you what happened in ours!

First, be honest.  Have you held back from saying hard ‘things’ to your partner / family / close others until you’re ready to explode? Then it comes out via anger, with an added layer of hurt on top.  And stress.  For everyone.  Yet avoids the actual argument.  For now.  Over time, tension builds up until the issue combusts into a bigger conflict.  By which time, resolution is harder to reach because everyone is that much more entrenched in conflicting perspectives.  A toxic spiral.

Because here’s what happens when we don’t do conflict well. On this day in Israel, we skirted the historically contentious.  We hurtled into the hard stuff.  There was a choice at one point about how to do our conflict conversation, but we sped past that.  Too fast.  And if one side can’t remember / relate to / understand the others’ point, it’s not easy to change lanes later.

The advice to accept anyway wasn’t in play.  So everyone was heard but no one felt listened to or understood.  The conflict finished (because we had to rush for a flight) but didn’t have an end.

So that 5th day, the lessons from Israel got louder for me.  The bit about understanding the why above all else.

On the flight home, I wrestled with that unsatisfactory ending some more and that’s when the secret ingredient for doing conflicts better became clear.

As much as it might be obvious – I know I leverage this for my clients, in coaching every day – we accidentally ignore this important step in conflicts and I know why.  Because we’re operating less consciously.

So there is a simple solution to mobilising the missing step in your conflicts from now on.  If you choose to.  It will change how you go into and come out of your conflict conversations forever.

CLICK HERE TO GET THE SECRET INGREDIENT FOR HANDLING CONFLICT

How To Compute Career Conflict

While issues are important in the professional space, they may feel less emotive than those in close relationships.  Which can help in important ways, but also brings new watch-outs.

Here’s how to apply the advice to conflict conversations in your career:

CLICK HERE TO GET THE SECRET INGREDIENT FOR HANDLING CONFLICT

Me vs. Myself:  How Handling Inner-Conflict Isn’t Different.

This kind of inner-conflict comes up when what you’re doing sits in contrast with what you believe or want for yourself.  Your values.   It’s often invisible to others, which of course contributes to the damage it can do if you feel stuck, forced to live your inner-conflict every day.

Take for example, one successful professional I worked with.  She happened to be a mother.  The point was this.  Two identities.  Two roles.  Leading one life.  Her conflict hit hardest because the role she feels to be more important to her (mothering) was not the role given most of her time (work).

In the end, if a satisfactory solution can’t be negotiated, one role-identity will always surrender to resolve the psychological conflict instead.  And so, mothers who want to work, ‘choose’ their children.  Because that is their need.   And needs win.

For all of us.  Whatever they are.

The value of coaching is that the client realises what is going on under the conscious.  Her conflict. In other words, she actually wanted the two roles to integrate so they didn’t need become an self-ultimatum.  Lining that up that took a lot of awareness, bravery, some financial problem-solving, planning and a sprinkling of luck.  And much support. But worked.  Well.

As with the more obvious forms of conflict, we need to recognise toxic feelings as a call to action.  We need to change something, or risk being driven unawares to a destination that gets our needs met but may not be aligned with what we want.  Ideally, we learn to do this early, when they are small undercurrents.

CLICK HERE TO GET #5: THE SECRET INGREDIENT FOR HANDLING CONFLICT  WELL

4 steps for handling different kinds of conflict have been mapped out so you can easily apply them to your career, relationships and even inner-conflict whenever these different parts of your life are badly aligned.  But the secret ingredient for handling conflict well in any situation is #5.   It might surprise you.   I know its power will when you use it.  Do let me know how this simple 5th step changes the landscape of your career conflicts…

Let me in on The Secret

Approval Is Overrated (Here’s How To Gain Self-Confidence Instead)